BOOK - RAISING ADAM - In the Face of Adversity 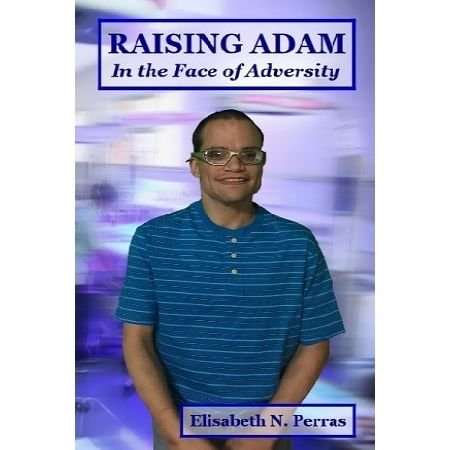 This is the true-life story of a little boy who came into this world far too early, very small and seriously ill, and all the roads we have traveled to ensure him a quality of life with a future of yet unforeseen possibilities.

Writing his story has opened many painful heartaches for me, but please know this, so many more have been healed while all hope was renewed as Adam met, and surpassed, the many expectations of his doctors, therapists, and educators. To help him, I found many ways to get his needs met, as well as my own. I received some by a simple request, but not very often. Others, I had to go over many heads, and turn over many stones, and get incredibly creative. But nonetheless, I succeeded in getting the help my son needed while leaving the door open for those who would walk the same footsteps many times over, and after my son.

This is for everyone who is unaware of what an enormous undertaking it is going to take to raise this special needs child and while trying to keep a family together. Whether single, with other siblings, or have a spouse who may be involved, this is for the parents, and grandparents whose hearts are so broken, and aren't sure they will ever get through it alone. They’re right on that point! They will need all the help they can get. One of the hardest lessons for me was to simply ask for help when I needed it. Much too often, and in many cases demand it!I attended classes on “Taking the Initiative” and getting resources, through local colleges and all the time earning continuing credits. But who's counting? I wouldn’t pull those certificates out until my son would be a nearly grown young man and placed in a group home setting. But certainly not before he went through multiple hospital stays, or campus type institutions, that all tried (and some failed) to make any significant difference with his bizarre behaviors. Books explained it to a point, but we were living it daily. Two very different and surreal situations.

Eventually, over time, even the most educated PhD complimented my amazing challenge on a job well done for a very sick and medically challenged little boy. I was forced to put all of his needs in front of my own including my health. But looking back now I know I would have done a few things more aggressively, like asking for daily help, including babysitters on a regular, and consistent basis. Demanding health care for myself, despite the fact I was considered indigent would now become a priority. Without my own health needs being met I grew very ill and all my responsibilities were not being done as efficiently, nor effectively, on any consistent level of competency as it should have been. This caused complete burnout, and loss of my own well-being, that being only a small part but major ongoing problem.

These children, though no fault of their own, can be very cute and manageable while still in their infant and toddler stages. A sadder reality is no one really ever wants to talk about the preteen, or young adult years, not even in support groups. The fact is these kids grow up, and once the family reanalyzes their own situations, even the best reconsiderations are met with strong resistance causing complete chaos and turmoil. The majority of time, while unintentionally combined with society’s prejudices, lives are forever changed and not always for the better.

As for my other children, his two sisters and my new husband were all floundering around on their own, with smiles. We really believed we had it all together.

Only when my middle daughter Heather left home at the age of 14, and the suppressed anger of my new husband Bill finally surfaced, did I realize something drastically needed to change. While talking to Adam's lifetime pediatrician, Dr. Ben Guedes who remarked to me “When was she a child?”, referring to Adam's gifted but troubled sibling. I now understood the toll Adam’s life had taken on all of us. It had affected our entire family. My oldest girl, Michelle was now afraid of her baby brother. After all, being a teenager when he was born, she wanted children one day, but nothing like this ever entered her thoughts. Adam would be hospitalized for over 6 months in a Neonatal ICU. Two months passed before I would be allowed to cradle him, and another month in the step-down unit before he’d be sent home the first time. The staff quickly nicknamed him “the repeater” for all the constant re-admittance during his next 11 years for chronic medical needs, and numerous admissions for psychological behavioral aggressiveness which are still going today.

So, it is with good conscience and a healthier heart that I share his story in the hopes to encourage others to ask for help, while being a guide for those too timid, or afraid, of rejection like myself to stand up, be heard and get noticed. The job they will be undertaking can be one of the most rewarding and certainly surpasses any modern-day miracles I personally have known of in my own lifetime.

While all my own value system has been completely rearranged, and focused correctly now, it wasn’t always that way. After all, I was a mom and wife, but not necessarily a miracle worker. God knows I certainly went above and beyond trying to be one. Blindly, not understanding that the cost was far more than any human being should give of themselves in a lifetime unless they are prepared to be a martyr or saint.

"In this book, Eli speaks frankly and with emotion about her life-changing experiences raising her multi-disabled son. This is a book anyone would appreciate reading, especially if your life is connected in any way to a disabled child. The trials and tribulations and the maddening harsh attitudes of many caregivers, especially at the administrative level, seem too much for anyone to bear. Eli's frustrated journey through a healthcare system that really did not know what to do and was poorly equipped to do what they were supposed to is an interesting trip that all of us can identify with. And she does not leave out the heroes she found along her way, as she guided her son through compelling traumas of childhood and puberty to adulthood. As a leading folksinger who specializes in writing and singing protest and civil rights songs, she uses the same voice in these chapters, as well. I first met Eli and Adam in April of 1984, when I was the director of a small early intervention program serving babies at high risk for disabilities and their families. It was my first week on the job.

Adam had already completed the program, but Eli called me and wanted services for her son. That is when I first witnessed her tireless advocacy and love for her son. What she lacked in resources, she more than made up for in her spirit and drive to help her son.”