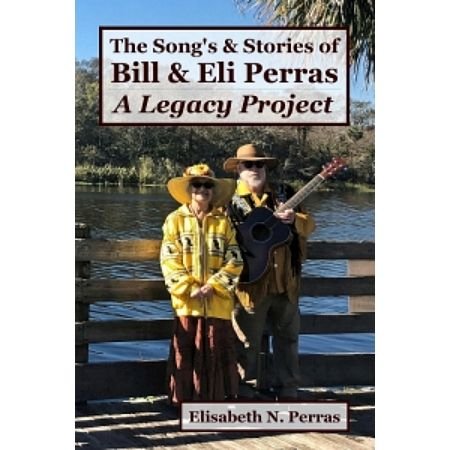 On most occasions when Eli and I perform, which are usually at venues such as libraries, house concerts, listening rooms, churches and festivals, the majority of our set list is comprised of our own musical compositions. Beyond that, the stories we tell prior to presenting our songs is one of the main reasons our act has taken on a life of its own. Our stories are mainly very sincere chronicles of our life, but also have twists of humor that keep our audiences sitting at the edge of their seats, all while we introduce audience participation into our act.

On stage, Eli uses a form of sign language that she and one of her daughters made up with the assistance of an American Sign Language book as a means to communicate with her handicapped son. Adam was born at home just over 10 weeks premature which rendered him completely deaf and with a severe deficiency in sight among several other disabilities but there will be more written about this subject in the following chapters. So now, besides using just songs to entertain and educate our audiences, Eli & I like to use the power of storytelling as an additional way of engagement. Our regular stories plus some improvisational narratives are common during our shows and this has become second nature, especially for Eli. These days our regular fans expect this type of show from us and it is leading to an ever-growing fan-base.

With much inspiration from noted storytelling musicians such as John McCutchen, Roy Book Binder, David Holt, and especially the late, great, Gamble Rogers (who was also one of the people who inspired me to play finger-style guitar), we speak out with strong heartfelt songs and stories against social injustices, corporate greed and the follies of everyday life, with hopes of changing a mindset or softly striking a funny bone and leaving the audience with a sentiment for the common good we desire in mankind.

In July of 2017, Eli authored “Raising Adam – In the Face of Adversity”, in which she shares many of the stories that she tells on stage relating to the trials and tribulations she experienced while raising Adam. So now, after performing well over a thousand shows, several noted attendees noticed that Eli would leap into a story using her natural stage presence as a way to further engage the audience, and they vigorously prompted Eli & I to use storytelling as a way to share our performances with a wider audience. That is exactly what we have done and now that we are involved with a few storytelling organizations, a new audience has been revealed to us.

With that, we needed a way to let our new storytelling fans have something to take home with them after our shows and we really had nothing. Since the time that we released our first CD which is now out of print and the master recording lost we have produced 3 more albums. These 3 CD's were now nearly out of stock so we needed a new product that would be suitable and desired by both the storytelling and folk communities alike.

My “think tank” experience from working at engineering firms for over 35 years sent my mind spinning. First, Eli & I explored our recorded song archives and we selected 29 of our original songs from those 3 albums that we felt were the most representative of our original music. There were also 3 other songs from our first album that we wanted to include in this effort but since the master recordings had been long lost, Eli & I re-recorded them in our home studio. That would make the total number of songs for this new project increase to 32. I was then having a bit of fun with some new recording equipment that I recently procured so I figured why not record 8 more songs (some old and some new) that we like but had never recorded so we proceeded to record them. That got the total number of songs up to 40 and we figured that was a nice even number.

A very important part of the final recording process was to have each of the songs mixed and mastered which means, without getting into much technicality to get each of the songs balanced and sounding as good as possible. Next, I took all the song files to my friend in St. Augustine, Jim Stafford, who is the owner of Eclipse Recording Company. Jim, the recording engineer and is well known throughout the United States for his high-quality work. Jim and I spent a day together in his studio and worked all the songs to have them sound as good as possible. We then re-listened to each song again making sure that all the songs would be at an even volume level when played consecutively from #1 to #40 and that a good flow would be created.

With the songs now in the bag, the next step was to figure out what kind of medium would be best suited for the project. I quickly realized that it would take 3 music CD's to hold the 40 songs, which would be quite expensive. I then explored what it would take to have the songs put on USB drives and the price to do that was nearly as expensive as putting the songs on 3 separate CD's. After much thought, I then converted each of the songs that were in a standard recording studio format, known as WAV files to a file format known as MP3. The extremely high-quality MP3 files were now approximately 5 times smaller in size than the WAV files which meant that I could fit all of the 40 songs on one CD, but now that we had the CD, how would I package it?Part of the plan that Eli & I had, was to write a book that incorporated all the lyrics of each song along with the stories behind each of these 40 songs. One way that I had seen in some music instructional books that I had was to stick a clear plastic CD sleeve with adhesive backing, on the inside-back cover of the book. That way, the book could also serve as the liner notes too. Liner notes are commonly written on the jackets of most well produced CD's and can also be found on vinyl record sleeves which are now making huge comeback. Now, with all the written information about each of the 40 songs now in the book along with a CD, the final product would serve as a good means to reach out to our new fans in the storytelling community. It would also serve as a new and different kind of product for our folk music fans.

With that, Eli & I realize that the most important reason that we took the time to complete this project is to share our legacy now that our time on this planet is more limited.

"This is a book & CD project was be released on January 1st, 2019. This project includes a CD containing 40 of our most exemplary songs in super high quality MP3 format, along with a 168 page paperback book authored by Eli and has the written lyrics and stories behind each of the songs that are on the CD, along with some detailed writings on the musical careers of Bill & Eli. “I have known Bill & Eli Perras for many, many years. We have shared much including the stage, recording sessions, meals and campfire song swaps. You’d think you know someone after all that time and togetherness but you’d be wrong. Only after being given the honor of helping to edit this book did I have the opportunity to experience truly captivating vignettes of their most extraordinary lives, one word at a time. It’s an intimate thing, a bonding of sorts that is both rare and wonderful. Experiencing this book has re-acquainted me with my dear friends Eli and Bill and helped me realize, once again, that the depth of their music, just like the depth of their souls is truly breathtaking. I invite you to share the in the music and lives of two original and exemplary individuals who unite to form a truly inspirational team. I give you, Bill & Eli Bill Perras, musicians, artists, authors and human beings with a timely message and a story to tell. I know you will enjoy it as much as I did!”